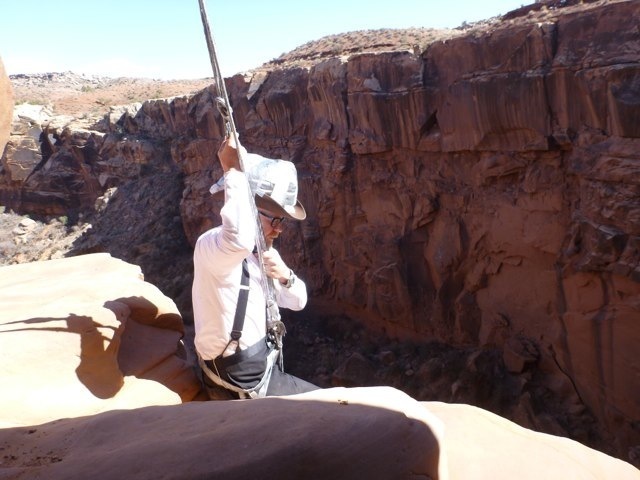 This Discovery Channel favorite had two of my favorite things: big cliffs and whitewater! The cliff was 180’ tall and is in a place we use somewhat frequently when we need a close by big cliff.

We were initially tasked with trying to devise a way to rappel down this cliff with a duct tape rope. The rope would be multiple strands of duct tape that has been stretched and twisted using power drills. These were multi-ply ropes with strands pinched and twisted together to make an even more rigid and stronger half inch thick cord.

We came up with some canyoneering-specific techniques that might work on the duct tape rope (DTR). We wrapped regular static ropes in a precise fashion (a Valdo-tain variation) that would disperse the friction over a wide area of the cord and minimize the heat and melting of the duct tape that otherwise would have been an issue with the use of metal carabiners and standard rappel devices. When they arrived however and we began to discuss this technique the plug was pulled and the decision was made to “cheat it”.

So we created the rappel by using a grey dynamic rope as the rappel cord that resembled duct tape all while having them essentially downclimb the DTR. Safety first when it comes to high demand TV personalities!

The river portion ended up being a bit ridiculous since the river was quite low, therefore the danger was in over-engineering a raft that would minimize the effect that waves would have on the boat. With a HUGE truckload of bubble wrap (of all types) and virtually an unlimited supply of duct tape the hosts easily created boats that managed to keep them dry despite a few decent sized waves.

After leaving Utah they went back to Cali and ran a stretch of the American river with a distinctly different look, size , color, and gradient. I guess they hoped you wouldn’t be watching closely. That river caused the boats a little more trouble, as anticipated.